A Complete Beernewbie: The Experiment


Beernewbie, aka my lovely sister, willingly (unwittingly perhaps) signed up to a challenge. She's never drunk beer, except for a couple of times about four years ago in Thailand, but that's a story for another day. Vodka & coke, or Archer's & lemonade are her usual tipple's of choice. I'm a newbie, but at least had drunk and enjoyed beer before, albeit in the past being as weak and pale as possible. I wanted to see if we could open her mind up about beer, maybe get her to like it, or at least realise that there is a great variety of beers available.

Knowing her well, I chose a couple of fruit beers to get started.

118: Fruitesse, Brouwerij Liefmans, 4.2%
"Fine" I believe was the response... later this developed to "niceish". Another comment was "not too beery". She was right, it's fruit character gave so much flavour it didn't hide the malt tastes, but didn't force you to concentrate on them. Personally I quite liked it, it wasn't over sweet, and it did what it said on the tin.

A raspberry flavoured witbier. Beernewbie thought this was easy to drink, but was less keen than Fruitesse. To me it was too sweet, and tasted not of beer but more like fizzy raspberry pop, and the alcohol content was invisible. It surprised me that Beernewbie's preference was for the one that actually tasted like a beer, and that she wasn't touting for the almost alcopop taste of the Hoegaarden. 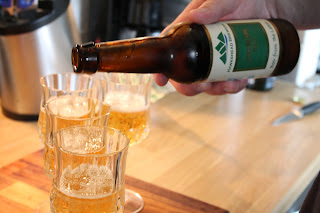 Next up. Error. I'm not counting this for me as have tried it before. Windermere Pale, Hawkshead, 6%. My recollection of this was tropical fruity peachy hops. The idea was to introduce a non-fruit beer into the mix with one that had fruity hop edge. Beernewbie said that it smelt nice, but that she wasn't expecting the taste that ensued. A face was pulled that was worth of Juffage's blog, unfortunately I didn't have the camera handy! A bad choice, far too bitter so early on in the evening for Beernewbie. She did concede that it improved after a few mouthfuls, but she still didn't like it.

Innis & Gunn Rum Cask, Innis & Gunn, 7.4% A pretty strong beer for a beginner, but the toffee caramel, sweet but not too sweet flavours, and the lack of bitterness meant that Beernewbie quite liked this. She still preferred the first fruit beer, but said she would willingly drink this again if provided with it! 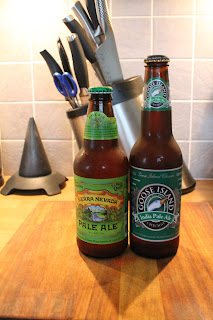 Next were a couple of beers as recommended by Filrd and Matt Curtis. India Pale Ale, Goose Island Beer Co., 5.9%. Beernewbie didn't like this as much as the Innis & Gunn, but she didn't dislike it like she did Windermere Pale. Orange, citrusy aromas and tastes and a pithy orange bitterness. The verdict was "this is ok". Now, I know that isn't overjoyed praise, but coming from Beernewbie, that is pretty impressive I think.

120: Pale Ale, Sierra Nevada, 5.6%
She didn't like this as much, even though it was slightly less bitter than the Goose Island. It was drunk though!

Chocolate Porter, Meantime, 6.5%. Again, another beer I've tried before. This time around I got more hints of coffee and hazelnut than I did chocolate, but still a really yummy porter. Beernewbie liked this beer. Still, didn't surpass the favourite first beer, but she liked it. 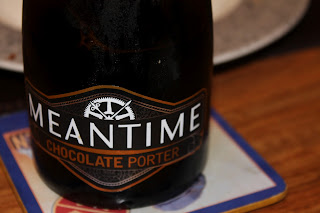 There were a couple of other beers sampled during the evening which Beernewbie tried, including a pretty pricey bottle from Marble. This, she quite liked (again, a pretty decent compliment really!). Will post about these later.

Clearly, for a non-beer drinker, the off putting flavour was heavy bitterness, and this was what Beernewbie kept describing as "beery". The less bitter, the more she liked it. Beernewbie did say, that she would be up for sampling again, although maybe that was the beer talking! She is still not a beer lover, but there is a smidgen of hope! Thanks Beernewbie for keeping an open mind and putting up with this beer geek!